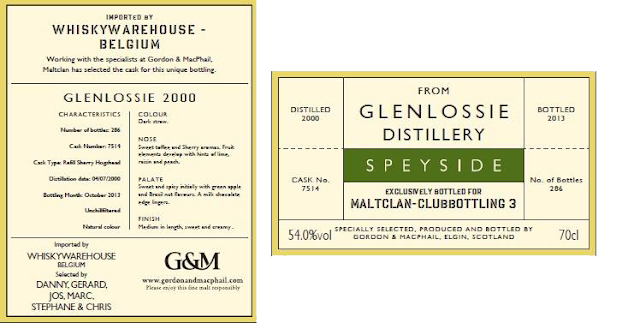 Belgium whisky club Maltclan recently released their third bottling. It is again a bottling from Gordon & Macphail. After a first Glenrothes and a second Glenburgie, they were in for a third 'Glen': Glenlossie.

Colour: This Glenlossie was laid to rest for thirteen years in a refill sherry hogshead. It came out with a dark straw colour, like some Amontillado sherries, and a delicious sticky texture. Swirling it in the glass does not leave any tears or legs. It just forms a thin oily coat.

Nose: Some very clear sherry influences. Despite its ABV of 54%, it does not punch you on the nose. On the contrary, it is refreshingly soft. I'm associating this with dry white wines. Grapes and pears. Peaches poached in sugar. A lovely Peche Melba with a dash of lemon juice and sliced almonds (forget about the raspberry coulis that comes with this classic dessert for a moment).

Taste: What a creamy explosion of flavours. Very spicy at first. You have just taken a bite from a fresh green apple. A few seconds later (due to you saliva) the sweetness arrives. Vanilla, raisins, dried figs and almonds.

Finish: Relatively long. You'll enjoy this one for a few minutes. Like you stuffed your mouth with almonds and dried figs.

Conclusion: A lovely balanced sherried whisky. Creamy, sweet and a delicious spicy punch. A very nice starter whisky that has no colourants, unchill-filtered and bottled at cask strength.

I'm finding this one a lot more accessible than last year's Glenburgie. It's a tasty dram and budget friendly. It could be bought for € 50 at Maltclan's Hogmanay (and perhaps at future meetings). A very honest price setting if you ask me.