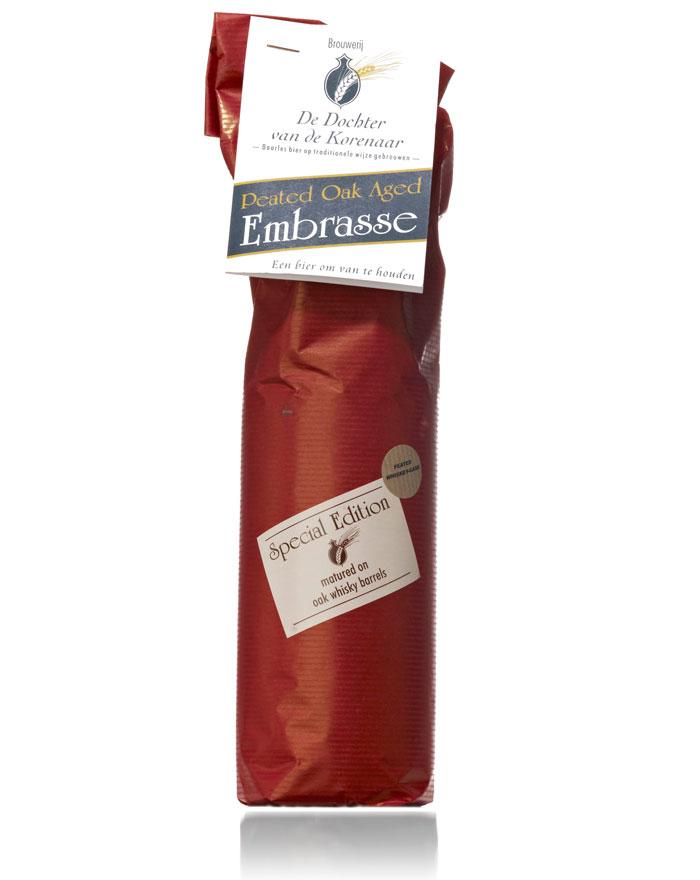 Dochter van de Korenaar is a Belgian microbrewery. The Dutch Ronald Mengerink runs his craft brewery in Baarle-Hertog. The name of the brewery is inspired by a quote of Charles V that was written down in the chronicles of the city of Mechelen: "Ik kan beter tegen het sap van de dochter van de korenaar, dan tegen het bloed van de druiventros". Loosely translated as "I’m a better match for the juice from the daughter of the ear of corn than for the blood of a bunch of grapes."

Peated Oak. The first batches matured in casks that previously held Connemara whiskey from the Cooley Distillery. The June 2013 batch was lagered in Lagavulin and Ardbeg casks. Don't be fooled by the sticker stating "Peated whiskey cask"...
Time for my very first beer review!


Colour: Embrasse is a dark beer with a red hue and a firm foamy head. It is best served between 10°C and 15°C.

Taste: The sweetness continues on the tongue. Red fruit, honey and burned caramel. The Islay influences are getting a bit more tangible. A pleasant and lightly smoked beer with a good punch.

Finish: The finish is bittersweet and mineral. The beers from De Dochter van de Korenaar are a rare find but very much worth the hunt. Embrasse is a typical winter beer that conserves easily and deserves to be enjoyed slowly. Or as the brewer states it: "A beer to treasure". And if the good man starts to season his beer with the finest Islay liquids...