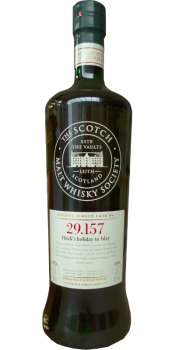 The Scotch Malt Whisky Society bottles single cask whiskies since 1983. Every bottle looks the same at first sight. They are only to be distinguished by a unique code and a rather original name and tasting notes.

Laphroaig is an established name in the Society range. The Islay distillery, started by Donald and Alexander Johnston, will celebrate its bicentenary next year. Laphroaig itself already announced the return of the famous 15-years old. And I would not be too surprised if the Society would honour them with a commemorative bottling.

Burning Christmas trees on the beach


Tasting notes from the Society panel


This invigorating dram was fresh-faced and light of heel. In Heidi’s basket was Black Forest ham, sea salt and balsamic crisps and red licorice. As she skipped along the shore of seashells, aromas of Pears soap and alpine flowers emerged. Clean, ashy smoke mingled with juniper and Arbroath smokies as the drizzle fell. It was as if Heidi had stood a wee bit close to the fire in her wellington boots while she cooked scallops and sausages with tomato sauce. A hint of hashish completed the picture - well, she was on holiday!


Colour: Heidi has a nice amber colour and leaves almost no legs on the side of the glass. At the very best a few oily pearls. A promising texture.
Nose: Sherry and peat remain a divine combination for Laphroaig. Honey glazed and smoked ham with sweet chilli sauce. Bolzano salami and spent matches are flavoured with baked apples and burnt sugar. Towards the end, someone tossed some cinnamon barks on the hearth fire.

Water gives it a slightly soapy aroma. Things get fresher with some liquorice and soft soap (in a pleasant way). Glazed ham with barbecue spices and grilled bread.

Taste: The first sensations tastewise are sweet, salty and spicy. The start is rather sweet with notes of honey and fruity chewing gum. Then it evolves toward chillies and some smoked salt. Maybe even skippers on the BBQ.

Water transforms the sweetness into salt potato chips. The sharp peppers are equally pushing through. Smoked ham and typical Laphroaig flavours like ash, ember and sulphur. Another impressive Society Laphroaig with a varied array of flavours. The sherry cask gives it the depth that makes it outstanding and yet does not conceal the typical Laphroaig character.

I have tasted this whisky three times till now and a bottle is on its way. Do I need to say more? This Laffie costs €105 at The Scotch Malt Whisky Society Benelux (shipping included). In the U.K. it was on sale for £62.40 (already sold out).