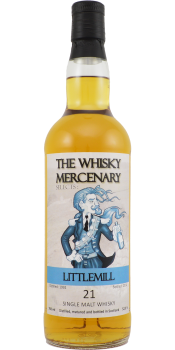 Littlemill was a distillery on the border of the Lowlands and the Highlands in Bowling. The distillery (or what's left of it) is owned by Loch Lomond Distillery and came to a sad end in 1994 with the bankruptcy of its former owner and the dismantlement in 1997. And yet it was not enough, the remnants of the distillery were destroyed in a fire in 2004. Definitely end of story for the Queen of the Lowlands.

Jürgen Vromans, also known as The Whisky Mercenary, is an independent bottler from Belgium. The guy has a nose for affordable and quality bottlings (a few Clynelish from the sacred year 1997 and a 1976 Bunnahabhain amongst them). In April 2014 The Mercenary returned with an unknown 18yo Speysider and this 1992 gem from the bemoaned Littlemill.


Colour: Ex-bourbon it is. Even after 21 years in the cask, it kept a pale straw yellow colour. The whisky itself leaves thin slow legs on the side of the glass.

Nose: The Lowlands freshness clearly wants to say hello! Grass, vanilla and young white grapes prelude almond pastries with sugar icing. Add the scent of a glass of white chocolate milk and you are all set for a fab evening. Don't forget the scented candles with vanilla, lemon and peach sorbet.

Taste: Freshly cut grass and vanilla are again the dominant flavours on the palate. The whisky gets creamier with notes of lemon tart and sweetened whipped cream. Oak, grapes and lemon rind add a small touch of bitterness.

A dash of water gives way to a spicy sweetness with the usual suspects from a bourbon cask: dried bananas and coconut.

Finish: A slightly drying aftertaste refreshes the palate for the next sip. Oak chips, citrus and dried banana flakes. 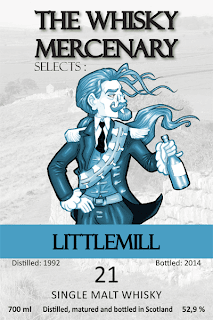 
Littlemill is one of those distilleries that make me regret I didn't start reading books on whisky earlier on to absorb knowledge on and appreciation for these Champions League players. My first meet and greet with Littlemill (a 1991 bottled by The Nectar and La Maison du Whisky) had an incredible wow-factor. This Mercenary bottling walks the same path.

This 1992 Littlemill went on sale for €115. Very reasonable for a 21-year-old bottling from an almost legendary and closed distillery. Sometimes I hate my own stubbornness that keeps me from buying bottles in the > €100 range...

Images: The Whisky Mercenary and Whiskybase