The Whisky Mercenary The Nameless One 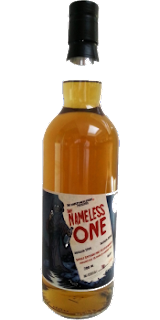 Belgium's The Whisky Mercenary released at least 7 bottlings in 2014. Most are well-known distilleries (think Clynelish, Ledaig and Littlemill). One of his bottlings, however, came from an unknown cask. Some details were still legible on the sherry cask, alas for the distillery name. It's no real surprise that a cask shrouded in such mystery would be baptised "The Nameless One".

The label artwork from illustrator Stieven for the standard bottlings is stunning, but with this label he surpassed himself. Imho, he signed up for the coolest label of 2014.


Identity Card The Whisky Mercenary The Nameless One


Colour: A beautiful golden coloured whisky that leaves thick legs on the glass. That's the way we like them!

Nose: The Sherry is strong with this one. Big sweet flavours from mango compote and orange marmalade. Apricots and pannacotta with passion fruits. Gingerbread and stem ginger, raisins and a lost clove. Towards the end, I got a nice herbal surprise: olives with garlic. Didn't see that one coming...

Finish: A warming aftertaste with orange marmalade and cherry jam. 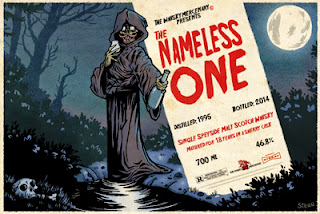 
Speculations on the origins of The Nameless One pointed to Glenfarclas. Jurgen himself claims it's certainly not one from the Grant family... And since the cask end was unreadable, the contents will probably remain a mystery. The most important thing was the liquid inside and it truly delivered. The whisky inherited all the top flavours after 18 years in a (refill?) sherry cask.

The Nameless One costed €79 in specialized shops. A good price for a cask strength 18yo sherried Speysider. And the stunning label came for free. I'm becoming a Mercenary fan...
Images: The Whisky Mercenary and Whiskybase