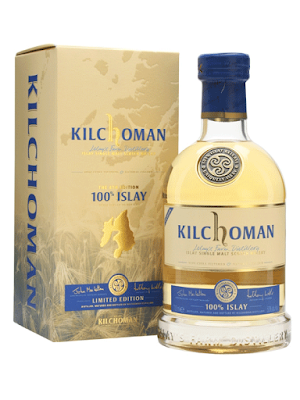 Kilchoman is Islay's smallest and youngest distillery. When Anthony Wills started Kilchoman in 2005, he had the ultimate form of whisky craftsmanship in mind. From sowing the barley to bottling a single malt whisky. Everything should be done on his farm distillery.

Meet 100% Islay. Or replace that with 100% Kilchoman. Growing the barley on Rockside farm, malting and kilning, mashing and distilling, maturing and bottling. Every step in the process is done on site. Craftsmanship. Period.

Kilchoman released four editions of 100% Islay whisky to this day. The whisky is bottled at a higher strength (50% ABV instead of the usual 46%) and is peated to a lower level (25ppm) than the Machir Bay and Loch Gorm whiskies. The malt for these core range whiskies is bought at Port Ellen Maltings and contains 50ppm.

The ultimate form of craftsmanship?

Colour: The whisky has a pale straw colour and shows thin slow beads on the side of the glass.

Nose: A refreshing aroma rises up to your nose and shows the ex-bourbon character of the whisky. Fresh citrus and a typical coastal association: a salty sea breeze. Rye bread and coconut. A touch of aniseed. Whole-wheat bread, marshmallows and chocolate.
A drop of water makes little or no difference.

Taste: The core ingredient is put to the front. Lots of grains on the palate. Biscuit cookies with pieces of fruit and vanilla. Rye bread and rock sugar. Roasted bread. Sweet lemon and liquorice candies.
The water unveiled a slightly bitter touch of lemon peel and Betterfood or Vitabis biscuits (biscuits used for baby porridge).

Finish: A long yet soft finish with grains and white pepper.

Robert Burns would be proud of this whisky. I can almost hear him whispering: "Here's a bottle and an honest friend!". A light and refreshing whisky that proves to be a perfect companion for spring.

The Wills family is doing a rather outstanding job on Islay and is celebrating its tenth anniversary this year. In May they will present a new Machir Bay and the fifth 100% Islay whisky.

The price for this piece of craftsmanship lies around €75 (at Jurgen's Whiskyhuis) or £64 (at the Whisky Exchange).