Return of the classic! 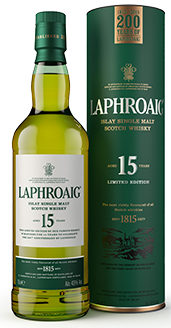 Laphroaig Distillery will be  releasing a special edition whisky for the brand's 200th anniversary. It is a release that is very close to many of the Laffie fans hearts, the much loved (and missed) 15 year old.

The first 2,500 bottles have been made available to The Friends of Laphroaig from as from today, 2nd March, until end of stock.

Laphroaig 15 year old was first created 30 years ago. Barrels were individually selected for their particularly mellow rounded flavour, then batch bottled at the higher export strength of 43% ABV. The resulting flavour soon became a firm favourite winning many awards.

Its highlight was being chosen for the famous ‘Erskine Charity Bottling’ in 2000 when 270 bottles were drawn from a single 15 year old cask signed by HRH The Prince of Wales for this charity of which he is a patron.

Thijs from Words of Whisky already wrote an extensive blog post on the return of this Islay gem: http://wordsofwhisky.com/laphroaig-confirms-15yo-coming-back/

But there is one really important sentence in the article that really merits to be quoted: "Campbell did mention that (and he wasn’t entirely sure about this) around 72.000 bottles would go to market."

The website has been down for most of the day due to the interest for this specific whisky...

The price will be (according to rumours)  £67.50. Some of the ones who did manage to buy a bottle already said to have paid approximately £84 / €115 (shipping to northern Europe included).

Source and pictures: Friends of Laphroaig