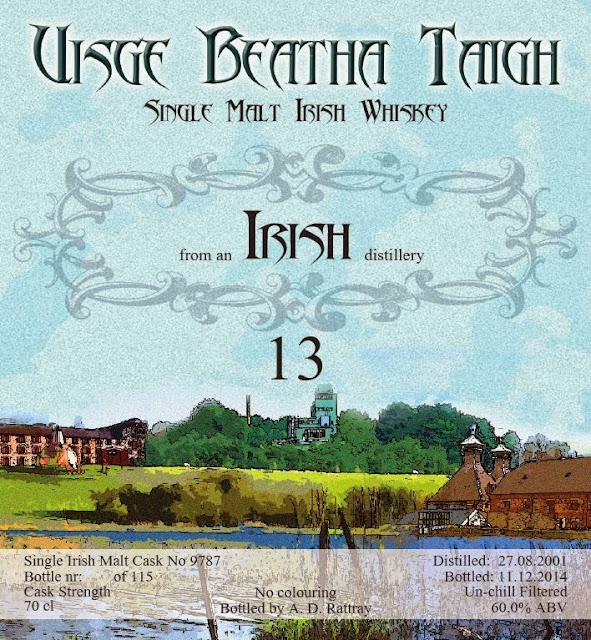 Irish whiskey achieved something in the 19th century we all want: world domination. After the Prohibition, they never reached the same soaring heights and were surpassed by the Scots. It wasn't until the early nineties we started seeing signs of a renaissance.

Another sign of the boom in Irish Whiskey is the number of independent bottlings that are entering the market. Most of them are undisclosed single malts from Bushmills or Cooley. This particular Irish whiskey is bottled by Belgian shop Jurgen's Whiskyhuis under the Uisge Beatha Taigh label.

A gem from the Emerald Isle

Colour: Straw yellow in colour. Like barley in summer. Slow legs are already promising me a delicious texture.

Nose: Quite a busy nose. Liquorice candy, wine gums and honey. A mixture of grains and honeysuckle. Coconut, hazelnuts and walnuts are giving it a sweet and obviously nutty layer. Add to that some Nutella and milk chocolate and this is a fabulous whiskey.
A few drops of water enhance the Nutella and chocolate. Some unripe bananas, a slight hint of cognac and marzipan.

Taste: The palate is rather rough at the first sip. Wood dust, porridge and barley sugar. The slightly sour and sharp notes make it interesting. Wood, cinnamon bark and vanilla balance it.
Water makes it a lot more palatable. It really pays to reduce the 60% alcohol by volume.

Finish: Woody and warm with some peppers.

Jurgen's first bottling, a 20yo Ardbeg, was already an absolute stunner and this Irish whiskey walks the same path. A bit rash at first, but with a few drops of water a true gem from the Emerald Isle!

I'm not a big fan of the label, but the content totally makes up for it.

The whiskey is for sale at Jurgen's Whiskyhuis webshop for €81. Edit: The whiskey is discounted for Saint Patrick's Day. Price of the day: €77.