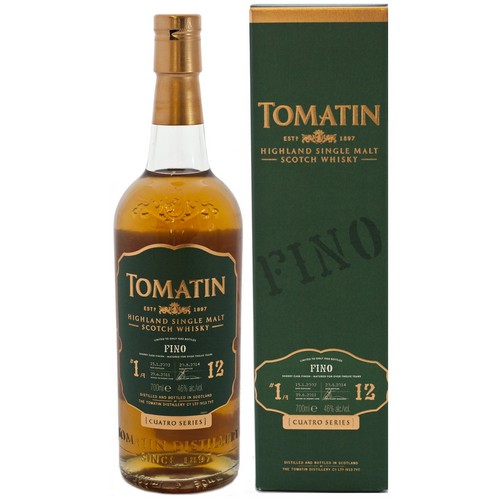 The four whiskies from the Cuatro series come from a spirit batch distilled on the same day. The whisky matured for nine years in American Oak casks before being transferred to four different types of Sherry butts for a period of over three years. As a result each of the four expressions have developed their own unique characteristics. Today I explore the first from the series: Fino sherry cask.

Fino is a pale and dry sherry variant and the most known and readily available variant. It is made from Palomino grapes and ages under a layer of flor. This layer of yeast prevents contact with the air and gives the sherry its yeasty and salty character.

But now it is time to explore the whisky and the flavours it inherited from the Fino sherry casks.

A Spanish experiment in four acts

Colour: A golden whisky that leaves thin legs on the glass.

Water gives some more room to the citrusy flavours with a little acidity and bitterness.

Taste: On the palate this is a sweet and fruity whisky with some wine flavours. A fruit salad drizzled with wine. A bit of pepper and green apple.

The Cuatro Series is an interesting experiment. It may be inspired from the Glenmorangie 12yo series which are basically the Glenmorangie Original 10yo with an additional 2 year finish in a port, sherry or wine cask. Tomatin pushed the idea a little bit further by splitting up one batch of spirit into 4 different whiskies each with a very specific sherry finish. A bottle of the Cuatro series (12 years old, 46% ABV, natural colour and non-chillfiltered) costs approximately €68.

If you still want a bottle, you'd better be quick. These are already a few months available and Tomatin only released 1.500 bottles of every whisky. Oh, and the marketing dept. added a little detail to the bottles to make sure you would want to collect all four of them. Unless you are perfectly fine with a bottle that states "bottle 1/4"... I know I would want all four of them.