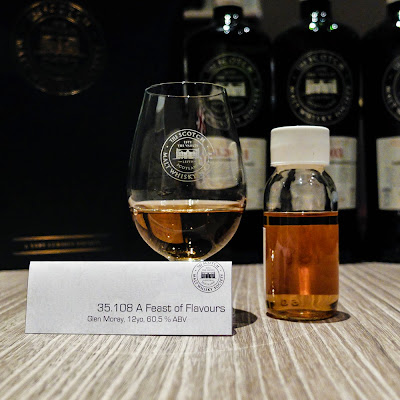 Glen Moray is a Speyside distillery on the banks of the river Lossie. The former brewery was part of the Glenmorangie portfolio (consisted of Glenmorangie, Ardbeg, The Scotch Malt Whisky Society and Glen Moray) when it was sold to luxury concern Louis Vuitton - Moët Hennesy in 2004. The brand was considered less desirable (read: it did not fit into the luxury plans of LVMH) and was disposed of fairly quickly.

La Martiniquaise bought the distillery and upgraded its capacity from 2 million litres to 3.3 million litres. Glen Moray nowadays supplies malt for the Label 5 blend and its single malt core range consists of some pretty high VFM bottlings like the 10yo Chardonnay matured, a 12yo and a port cask finish.

Picking fruits and nuts on the banks of the river Lossie

Tasting notes from the Society panel

A fat powerful nose full of chestnut puree spread thickly on granary toast served with Horlicks. Slabs of treacle tart and a scoop of Camp coffee ice cream with nutty toffee sauce and washed down with hot chocolate. The panel reclined into a polished leather sofa and were served meats roasted with caraway and fennel. Lashings of red currant jelly, apple sauce and onion marmalade. Brandy snaps singed at the edges and golden syrup flapjack with a shot of espresso to finish. The panel suspected some alchemy at the distillery which experiments with wood. Tread carefully with the water.

Colour: Golden orange. Air bubbles remain visible for quite some time. Fine beads stick to the side of the glass.

Nose: Clean and spirity at first nosing. I'm having notes of port, wet wood and buttered toast. Soft milk bread or brioche, a mix of nuts, raisins and winter spices (dried oranges and cinnamon). Prune jam and a leather belt. There's a fair dose of red fruits in the form of red currant marmalade and wine.
A splash of water throws some brown sugar, roasted and caramelized oat flakes in the mix. Sweet chestnut puree, nut cake and orange marmalade.

Taste: The whisky feels oily in the mouth. And the high alcohol volume does not hide. Again winter spices. Citrus fruits, star anise and cinnamon. Roasted oat flakes with sugar and fig jam. Some slightly bitter tannins and Vicks lemon drops.
The water brings back the chestnuts and cinnamon with coconut cream. Chocolate milk. Baked apples with aniseed, eucalyptus and resin. Lemon rind soaked in rum.

Finish: Strong coffee with sugar and vanilla cream. A long and warming finish.

Glen Moray seems to perform rather well at a young age. The core range expressions are living proof of it. And this SMWS cask is pretty much the same. At only 12 years old, it is loaded with flavours from the first-fill sherry cask. I really enjoyed this one and regret not having bought a bottle when SMWS Benelux put a few bottles of it on its website.

This is a Society bottling from 2013, so all of the 609 bottles are all gone. My first Society Glen Moray and surely not the last. This was an affordable sherry bomb perfectly suited for cold winter evenings.