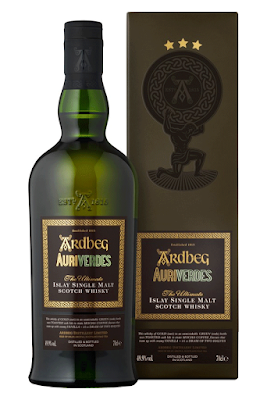 Today marks the end of Feis Ile. Thousands of Ardbeg fans, collectors and fast-money investors will queue up outside Ardbeg Embassies to lay their hands on the latest hype whisky of the brand.

Last years Ardbeg Day was all about football (it was the World Cup after all), so the marketing boys went full frontal. The golden (auri) liquid in the classic green (verdes) bottle got a Portuguese name referring to the Brazilian football team, peat football tournaments were organised and the whole crew got a sports outfit. One would almost forget Ardbeg Days is about whisky...

The whisky matured in ex-bourbon casks with especially toasted lids. One lid was lightly toasted for vanilla flavours, the other lid was heavily toasted to release mocha flavours. Does the liquid in the bottle can proudly bear the name Ardbeg?

Colour: Ardbeg got the colour right, a good start. Auriverdes has a golden hue and leaves thin and fast legs on the glass.

Nose: This Ardbeg is pretty restrained at first nosing. Fresh roasted coffee beans and vanilla. Toasted bread with pickles. A light smokiness emerges. Vanilla custard and roasted fennel and cardamon seeds. A faint hint of rubber tires and epoxy resin. Some fat white chocolate.
A drop of water gives me rubber gloves and sweet fruity notes. Bananas and melons. Honey and a bitter touch from some walnuts.


Finish: Bread with milk and white chocolate and soaked in coffee. The finish is pretty long.

When I visited one of the Belgian Ardbeg Embassies last year I was pretty disappointed for quite a few reasons. Rant starting: Prices were way higher than in neighbouring countries. Embassy launch price in Belgium was €130. Other stores were forced to tie-in sales. It was cheaper to drive to Holland or to order it at La Maison du Whisky and pay the shipping. The event itself was rather substandard. Putting a goat with the letter 'A' painted on its back and serving from time to time a dram in plastic cups... I turned back home without even tasting the Auriverdes and ordered a sample a few months later. /rant.

Despite all marketing hype, the whisky simply delivers. It's a step up from the 10-year-old and the Ardbog. The nose may not be instant-Ardbeg but is packed with flavours. The light texture, the pretty complex and smoky palate make this a true Ardbeg.