Feis Ile 2015 is well underway and Fred Laing and the Douglas Laing crew hosted a few whisky tastings on the magical island of Islay these past few days. To commemorate the Festival of Malts and Music they released a special Feis Ile whisky: a single cask Laphroaig bottled under the Old Particular label. Enough chitchat, let's have a look at it!

Colour: A nice golden barley hue. Slow legs form on the side of the glass if you are patient. The liquid is pretty sticky and leaves small beads on the glass.

Nose: There is no need to stick your nose deep into the glass. A few seconds after pouring a glass, the room fills with a stunning (and very Laphroaig-like) perfume. The signature peat and tar are hard to be missed. A mixture of mashed raspberries and soft Haribo bears. Sweet eucalyptus and another Islay trademark fragrance: bandages and antiseptics. After a while, I'm getting more earthy aroma's like wet potting soil and heather. And there's a faint hint of dark chocolate and nuts. A few drops of water reveal some juicy blood oranges to me.

Taste: The mouthfeel is oily and warm. Toasted wood and bandages. Sweet red fruits and a slightly salt note of seaweed. Again those earthy flavours from the peat. Lemon preserved in salt. Water gives me an extra boost of peppery peat and a peach-like sweetness at the same time. 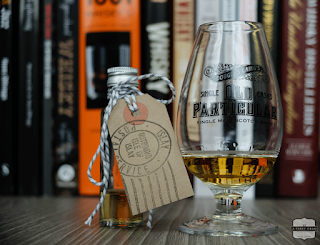 Conclusion Wow! This is another top notch sherry cask from Laphroaig. I already had a sweet spot for the combination of refill sherry casks and the earthy peat flavours of Laphroaig and this one made things a little bit worse (or better). The sweetness pairs wonderful with the peat and slightly maritime flavours. A whisky that makes a geek smile and makes the girlfriend worry about her other halves sanity...

Price: £89 / €125 and up. Picture: The Whisky Exchange A sample (and a bunch of goodies) was provided by the kind folks of Douglas Laing. Thanks Jenny!