The four whiskies from the Cuatro series come from a spirit batch distilled on the same day. The whisky matured for nine years in American Oak casks before being transferred to four different types of Sherry butts for a period of over three years. As a result, each of the four expressions has developed their own unique characteristics. Today I explore the fourth and last single malt from the series: Pedro Ximenez sherry cask.

Pedro Ximenez sherry is a thick syrupy dessert wine. The grapes are either dried in the sun or picked very late so they contain more sugars. Most of the production takes place in Montilla-Moriles, outside Jerez, but maturation takes place in the Jerez region, thus allowing the nomination of sherry.

How did this PX finished whisky compare to the previous whiskies?

At last, time for dessert.

Colour: The darker the sherry, the darker the whisky. This expression is the darkest of the four. The colour approaches old gold and the whisky leaves thick and slow legs on the glass.

Nose: Definitely a lot sweeter thanks to the influence of the PX sherry. Honey and marzipan with sultanas and almond liquor. Chocolate and cherries drizzled with golden syrup. A bag of candy.

A few drops of water make little or no difference. The whisky seems a little bit spicier. An extra pinch of pepper lifts the whisky up.

Water gives it a hint of pepper and liquorice root.

Finish: A warm and spicy finish that slowly evolves towards a certain bitterness. Green tea with hops.

Tomatin did a hell of a job with the Cuatro series. A bottle of the Cuatro series (12 years old, 46% ABV, natural colour and non-chillfiltered) costs approximately €68. The PX cask gave it, as was to be expected, a lot of sweet notes. A few drops of water improved the palate by adding some spicy notes.

If you still want a bottle, you'd better be quick. These are already a few months available and Tomatin only released 1.500 bottles of every whisky. Oh, and the marketing dept. added a little detail to the bottles to make sure you would want to collect all four of them. Unless you are perfectly fine with a bottle that states "bottle 4/4"... (I know I would want all four of them)... 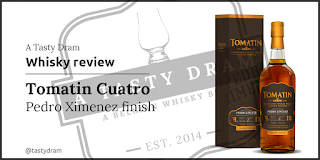