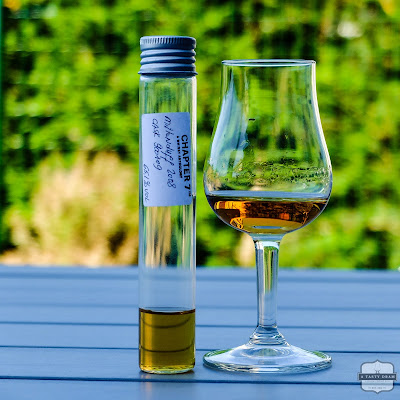 This Miltonduff is one of many "first times" for Chapter 7. It is the first sherry matured single cask, the largest outturn (butts are simply larger in size than barrels or hogsheads) and the highest in strength.

Miltonduff is part of the Chivas portfolio and is a key malt to the Ballantine's blends. Mr Ballantine's, Alistar Cunningham, was also the creator of the Lomond still, of which two were in use at Miltonduff to create the rare Mosstowie whisky. The stills were decommissioned in 1981 and Mosstowie is now a highly-sought-after whisky.

An old-fashioned farm on a hot summer day

Colour: The sherry butt did its job. Six years in the cask leaves the whisky with a shiny old gold colour. The whisky is oily and leaves very slow legs on the glass. The promise of a creamy texture?

Nose: Grappa everywhere! Raisins are very present with a clear meaty influence. A well made broth or gravy with raisins. Dates and figs mixed with draff and farmy flavours. The whisky also seems to have a slightly nutty character. A surprisingly soft nose, given its alcohol by volume. Vanilla and caramelcandy. Banana fritters and ice cream with bananas and chocolate.

Taste: The alcohol speaks up now with a distinct hot and nutty character. Nutella and quality chocolate spread. Sweet corn and cereals. It reminds me of and old fashioned (and sadly gone) Belgian lager: Safir beer.

The water gives the whisky some woody accents. A cigar box with black tea and creamy porridge with coconut and sweet apple.

Finish: Chocolate fondue with a splash of brandy leave a warming feeling in the mouth. Aniseed and lager malt.

This is young and fiery stuff and should be labelled dangerous with an alcohol percentage over 65%. Surprisingly soft in the nose with quite some body and a hot punch. A pretty nice sherry matured expression of a lesser known malt from Pernod-Ricard that transports you to an old fashioned farm on a hot summer day.

A price is not yet known, but I suspect this one will turn up in stores pretty soon.

Disclosure: A review sample was provided by Chapter 7. Thanks for the sample Selim!
Chapter 7 Miltonduff Scotland Speyside Tasting notes