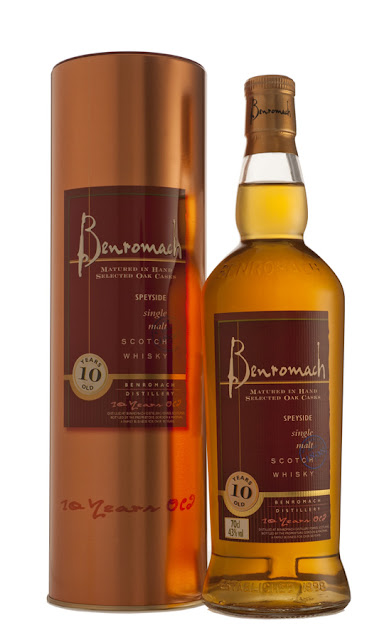 When Gordon & Macphail acquired the neglected Speyside distillery Benromach in 1993, most connoisseurs knew that something very good was in the making. Twenty years later, the brand reached top-of-mind awareness amongst whisky geeks. Many of them describe Benromach as an 'old school' Speyside whisky as they were made in the golden sixties.

The 10yo Benromach is the first result of Gordon & Macphail's ambitious work. It became a milestone for the distillery and a cornerstone for the core range. The whisky consists of 80% spirit matured in bourbon casks and 20% matured in sherry casks for nine years. Both whiskies are married for a further 12 months in sherry casks.

A postmodern classic work of art

Colour: A classic whisky with a natural old golden colour that leaves thin and fast legs on the glass.

Nose: Caramel and a tiny whiff of smoke from toasted oak. An explosion of banana after a few seconds. Some walnuts and sweetened apple juice. Ripe grapes full of sugars.

Water does not seem to add a lot and at 43% ABV, it is perfectly drinkable. Add a few drops of cool water or nothing at all.

Taste: The start is sweet with sharp edge. Fudge, caramel and brown sugar. A little bit of sourness of Haribo gummi bears. Whiffs of chocolate and smoke. A chocolate bar with nuts and dried red fruits.

The smoke and toasted oak come to the front with a drop of water. Vanilla infused caramel and a touch of bitter oak. Pretty good balanced whisky with a constant variation of flavours.

Finish: A slightly drying and long aftertaste with a fresh minty note.
Price: Less than €50 / £ 38.

The Benromach 10 got a complete, purely aesthetic, make-over last year. Chances you will find this version is rather slim. Unless you, like I did, found a triple pack with the 10-year-old, the Organic and a 2004 Peat Smoke. 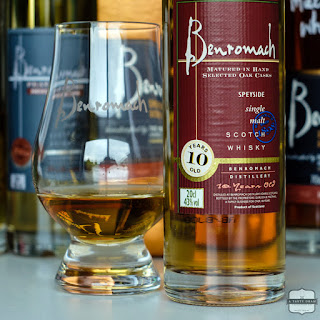 This is a no-brainer. Get a bottle, plain and simple advice! It's a truly great representative of the Speyside whisky style. If you only plan to have one whisky from each Scotch region in your cupboard, this is your Speyside whisky to go to. I cannot confirm this is whisky like it was made in the sixties, but I'm willing to buy that statement.

Next week I'll be putting this one side by side to the 2014 version. 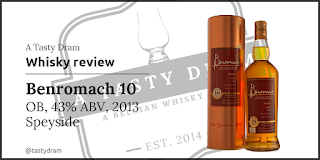