Don't hyde! Come out and play

Hyde Whiskey is one of the many new Irish whiskeys that have been popping up lately. The whisky might be the first step for Hibernia Distillers on the road to become an actual distillery. Update: Things got quite shady lately... Hyde appears to be mainly posing as distillers and even go as far as misleading consumers with a fake brand history. Anyway, their first whiskey is a 10 year old single malt from an undisclosed Irish distillery. Some say it is whiskey from Cooley. They could very well be right...

The name Hyde refers to Ireland's first president Douglas Hyde who was appointed in 1938. And it also happens to be the name of the two brothers behind Hibernia Distillers.

Let's have a taste of some "presidential" quality whiskey! 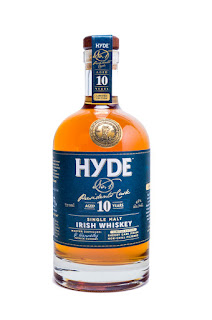 Colour: The whiskey does not show signs of artificial colouring. The golden hued liquid leaves slow legs on the glass.

Water gives a bit more oak and butter milk on the nose. It's less sweet with notes of green apple and fresh passion fruits. Honey and cinnamon take off the edges.

Taste: Sweet yet spicy on the palate. Honey and cereal bars with pepper. Rye bread with honey and vanilla. Lovely, and maybe typical Irish, creamy mouthfeel.

Water has very little influence. There's a bit of chocolate and a little nutty side to it. Fresh hazelnuts.

Finish: The aftertaste is pretty much a continuation of the palate. Sweet and spicy with plenty of malt. Crispy bread crust with flakes of chocolate.

Irish whiskey is on the march and can proudly compete again with its Scottish and Japanese counterparts and Hyde whiskey is part of it. Like lots of other new Irish distilleries, the people at Hibernia are buying casks from other sources (Bushmills and Cooley) to establish their brand before distilling is even started.

Hyde Whiskey 10 year old has a very nice balance between sweet and spicy wood notes. The nose is sweet and playful, the palate more mature than expected. It reminds me why Irish whiskey was my first whiskey love, but it somehow evolved together with my (sweet tooth) palate.

N°1 is a winner and a second batch has already been announced, a rum cask finished whiskey this time. Now, where's my pen so I can sign up for that one already... 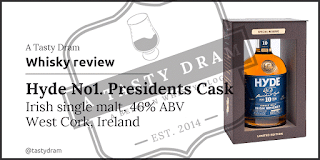 A sample of this whisky has been provided by Conor Hyde from Hibernia Distillers. Tasting notes and opinions are, as always, my own.