The Highlands Distillery of Tomatin was founded in 1897. Once a true giant producing over 12 million liters of alcohol, by which they even surpassed Glenfiddich in the early seventies.

The distillery closed its doors in 1985 due to the now famous crisis that forced one third of the active distilleries to close its doors. Tomatin was saved by two former Japanese customers and became the first Scottish distillery in Japanese hands.

The core range now exists of a NAS entry malt called Legacy, a 12 year old and a 14 year old finished on port casks. They also market a lightly peated whisky by the name of Cù Bòcan, named after a ghost dog that stalked the village of Tomatin for generations.

Colour: This is a very pale whisky, almost like a young Chardonnay. Given its age and high ABV it does not come as a surprise that the legs on the glass are thin and fast. When pouring a glass, you'll notice lots of small bubbles in the glass.

Taste: The palate is an overwhelming mix of grain biscuits and lime juice. Canned pineapple and a strong alcohol flavour. The mouthfeel is rather creamy. Peaches and clove.
Water gives me green chillies, jalapeños to be precise. A minimal bitterness from young fresh rosemary twigs and sugared lemon candy.

Finish: A nice warming finish with a sweet touch. The chillies make sure you'll enjoy this long aftertaste. 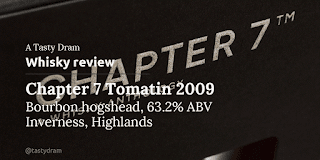 It is young, it is fiery, it is pale and sometimes that's just fine. A challenging dram with enough flavour to entertain a seasoned whisky drinker.