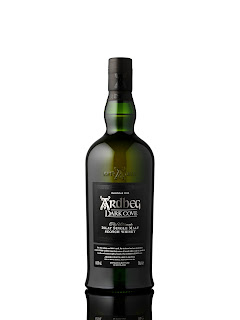 Somebody already discovered a new Ardbeg on Colas Online. Will Dark Cove be next years Feis Ile release from Ardbeg? Or a new addition to the core range? I'm opting for the latter since it's not a cask strength whisky... Althought it could compete with the heavily sherried Uigeadail. Time will tell.

The Committee edition went on sale a few days ago. Some Committee members got the e-mail, some didn't (yours truly neither). But I wasn't expecting those handbag sellers would wake up all of those 150.000 Ardbeg Committee members to buy a bottle of Dark Cove. Simply because it would be a mission impossible for them to meet the demand. Still, lots of people got disappointed because it sold in the blink of an eye.

Anyway, it sold out, the rest of us should wait the black edition with a lower ABV. Or do what Oliver Klimek advised: stock up on the core Ardbegs and leave those "special bottlings" for the flippers, collectors and investors. 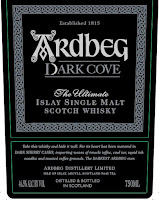 The back label reads:
"Its colour is that of copper stills in moonlight. Its nose - dark chocolate, rich treacle toffee and distant bonfires - betrays a secret: a clandestine meeting of Ardbeg matured in ex-Bourbon casks and a heart matured in dark sherry casks. Hints of pepper spice and zesty lime lure you in. Smouldering charcoal and wood polish flit across the palate, with raisins, dates and ginger emerging from the shadows of tarry creosote. Echoes of cured smoked ham and squid ink noodles signal the arrival of a long spicy aftertaste.

Take this whisky and hide it well; For it is Ardbeg's darkest spirit ever." 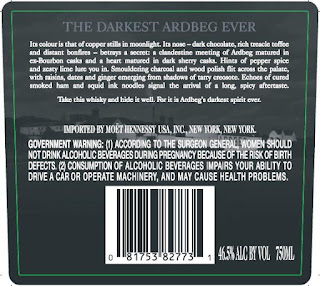 What's It Gonna Be?

UPDATE 20/10/2015: A new label appeared on the American TTB register. Just like last year's Feis Ile, we see different variations on the same label. Two important things to notice here: a higher ABV and a "special Committee only". This means we could actually see two different bottlings. A readily available bottling at 46.5% and a special release at 55% alcohol... You know something I don't? Feel free to drop me a line!
Source and pictures: Colas Online
Ardbeg English Islay News