The Eagle has landed

The Arran Distillery is one of Scotland's youngest. Established in 1995 by former Chivas director Harol Currie, it is one of the few independently owned distilleries and the only one on the Isle of Arran.

On your way to Lochranza you are greeted by the majestic and desolate ruines of royal castle that served as an inspiration to the Belgian cartoonist Hergé for the seventh volume in his Tintin series: The Black Island.

Construction work has been temporarily interrupted several times due to a pair of Golden Eagles that nested on a cliff near the distillery. To thank the people of Arran for not disturbing them, the eagles flew out on the day of the grand opening in 1997, in the presence of the Queen. 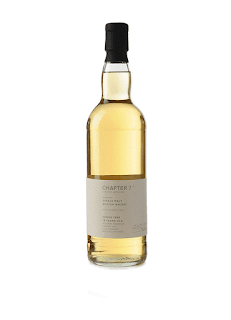 Nose: The Isle of Arran distillery is known to produce a fruity spirit and this single cask is no different. Lots of yellow fruits with a whiff of tobacco. Sun ripened yellow apples and lemons. Some mild vanilla and biscuits. Figs and ginger linger in the background.

With water fresh and crisp notes of lemon and ginger appear. A refreshing iced tea and brioche with raisins.

Taste: A creamy mouthfeel. The prolonged fruitiness does not come as a surprise. Banana and yellow apples. Vanilla infused cream or confectioner's cream (custard). A bitter oak aroma tries to break through but gets called back by raisins and figs.

Water gives me more vanilla and melons. Some dried grassy notes and a touch of mint. A cool masala chai tea.

Finish: The oak finally breaks through with Charentais melons and the remains of a mint infused tea. 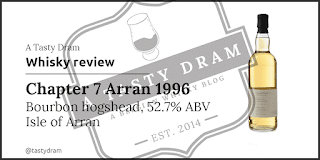 I'm not that experienced with whiskies from the Isle of Arran. Apart from another 18yo Douglas Laing single cask this is only my second dram from Arran. But I'm already a big fan of the fruity and sweet style. This is a creamy and liquid dessert with just the right amount of bitterness to maintain balance.