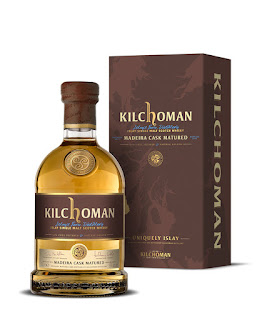 Kilchoman announcend today the final general release of 2015. It is the first Madeira cask matured release (if you do not take last year's Club release into account). Seventeen madeira wine barrels have been selected and filled with Kilchoman spirit in 2011. Kilchoman bottled them earlier this year at 50% ABV. The bottling was in the line up of this year's Kilchoman European Tour.

Only 6100 bottles will be available worldwide and find their way to specialist shops in the next few weeks. Some of the bottles will available from the Kilchoman website on Monday 5th October.

The Madeira Cask Matured follows the release of the Port Cask Matured in 2014 and is an example showcasing a full maturation in stead of a mere finishing in "special" casks. But bear in mind this is pretty young whisky and some finishes could take longer than this maturation.

Anthony Wills, Kilchoman Founder “This release is a break from the norm for us, it represents a bit of an experiment with full maturation rather than simply finishing whisky in casks like Madeira. Full maturation means that the impact of the cask is that much greater, the challenge is to ensure the whisky remains balanced and the influence of the Madeira cask is integrated with that of the Kilchoman spirit.”