The richest of the rich

Update: The Laphroaig Lore has been confirmed by distillery manager John Campbell. It will be a successor to the bicentennial  anniversary 15yo bottling.


What the back label reads:
'Lore' is the passing of skill or tradition through word of mouth.
Encapsulating the craft passed down from generation to generation over two centuries, Laphroaig Lore is our richest expression ever.

Liquid drawn from a selection of aged casks has crafted a rich deep malt with distinctive smoke, peat and seaside minerality.

This is our story. This is Laphroaig Lore. 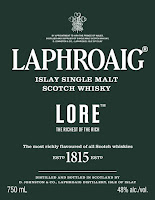 So. What do we know? It's Laphroaig. It's NAS and bottled at 48% ABV. It's a label from TTB Online. So we're not even 100% sure this whisky will see the light of day. But it's Laphroaig so fans will rejoice!