Caperdonich distillery started life as the - very originally named - Glen Grant #2. Built by J&J Grant in 1898 the distillery was literally connected to Glen Grant with a whisky pipe to pump the new make to the first distillery.

The distillery closed its doors in 1902 in the aftermath of the Pattison crisis. The stills at Caperdonich were almost identical to those of Glen Grant, the water source and the barley were also shared with Glen Grant. It wasn't until 1965 and a new owner - Glenlivet - we saw once again new make flowing into the spirit safe.

The now renamed Caperdonich changed hands two more times to be closed for good in 2002 by Pernod Ricard. Two pot stills have been bought by The Owl distillery in Liège and are used by Etienne Bouillon to create his famous Belgian Owl single malt. 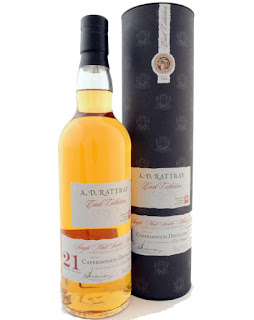 Colour: Very pale in colour gold. This was a refill bourbon cask. Swirling leaves thin and fast legs on the glass.

With water things get a bit more serious. Hospital aromas. Medicinal notes and a spicy chicken dish with curry and turmeric.

Taste: Biscuits with lemon juice. Pomelo citrus fruit. A light and playful whisky with a creamy evolution. Orange sherbet with a dash of Sambuca, an Italian anise-flavoured liquor. Chewable and spicy wood. 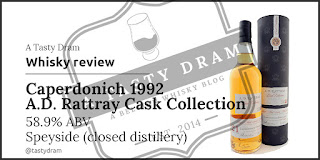 The price of this bottling is steadily going upwards. Not even a year ago this was around €100. But Caperdonich remains one of the few affordable closed distilleries and quite a few independent bottlers released delicious gems of Caperdonich. And this one... is one of them. Should have bought a bottle instead of a sample.