Jura Distillery lies north-east of its more fertile sister-island Islay. The island is populated by two hunderd inhabitants and are vastly outnumbered 30 to 1 by red deer.  That makes some 6000 (!) deers, give or take. Its most famous resident once described Jura as "extremely ungetatable". The man who wrote thart line was George Orwell. He finished his novel 1984 on the island a few years before his death in 1950.

The distillery changed hands when the parent company Whyte & Mackay was sold to Emperador Inc. It is one of the largest employers on the Island and produces around 2.2 million liters of alcohol per year. The core range exists of a 10 year old Origin, the 16 year old Diurach's Own and the peated Superstition.

Nose: Sweet peat right from the start. Lots of rubbery notes and smouldering wood. A pinch of salt. Smoked sprat on the barbecue. Orange juice with natural sugars, heather and and egg yolk from a boiled egg. With some time in the glass the whisky gets sweeter. Babies' porridge with apple and banana.

With water the rubber is a bit more pronounced. Something like creamy rubber tires.

Taste: The smoke is a lot more pronounced with medicinal notes. Mint and eucalyptus. The smoke is even more stronger at the back of the throat. Peppermint pastille and citrus. A slight hint of spices. Piment d'espelette perhaps?

Water adds a sweet touch to it. More peppery notes too. The smoke has been pushed to the back. A pleasant bitter touch.

Finish: A smoky finale with a mouthful of peppermint pastilles, some wood notes and bitter beer. 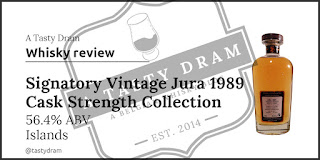 A fairly good independent Jura. Not as good as the Society single cask (Going nuts in a rugby club changing room) I reviewed a few months ago but still a solid whisky. I really loved the sweet and salty evolution with those rubbery notes. Perfect for a cold and dreary day like today!