Benromach launched one of their older expressions to day some two weeks ago: a 35yo single malt of the pre-Gordon & Macphail era and just a few years prior to the mothballing in 1983 by Distillers Company Limited (DCL). One could assume this is a 1980's vintage Benromach unless some casks have been opened in January 2016...

The whisky was distilled under the supervision of Donald MacDonald, the former Benromach Distillery Manager.  They filled the last cask 1983/535 on 24th March 1983. When Gordon & Macphail took over in 1993 it took them 5  years  (and a few millions) before the distillery was operational again. I think it is pretty safe to say the Urquhart family did an amazing job with Benromach. The 10 and 15 year old single malts are above par (as not to say vastly superior) to equally aged Speyside single malts. 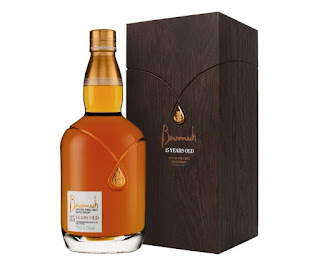 Colour: Amber stone. The age is reflected in the slow legs on the side of the glass.

Nose: The first impression is rather dusty. But once the dust settles down, there's plenty of fruity delight underneath. Old fashioned cough syrup with oranges. Typical sherry notes: dates and figs. Orange marmalade. Beeswax and honey. Grapefruit and old calvados. A wooden cask filled with small sweet and sour apples. A soft spiciness emerges as well as a drop of cider vinegar.

A few drops of water make it a bit more lively. Fresh and fruity with a subtle sweet note of cinnamon.

Taste: A fruity and spicy start. Sevilla oranges, cigar boxes, apples and green banana prepare the path for a gentle bitter interlude. A whiff of malt beer notes that reminds me of high fermentation beers like Duvel and Omer.

Water adds a touch of mint, chocolate and oak to this already lovely mix.

Finish: A soft finish but one with quite some stamina. Sticky orange candy, black tea with pieces of dried fruit, oranges and grapefruit. Superior milk chocolate with mint and a lost chiliflake.

This is the kind of whisky that reminds you there's always something new, better or older to explore. A dram you could nose for a whole evening without sipping it and still enjoying it. Gentle and elegant yet it retained a vibrant fruity character that's not overwhelmed by the oak spices after all those years in the cask.

I rarely get to taste this class of whiskies which makes it all the more special.

It's not exactly cheap yet still priced rather competitively. Fellow Speyside malts like Balvenie 30 (+ £600 or Dalmore 30 (+ £1000) would almost force you to sell a kidney. Benromach positioned it more in the 'reasonably' priced whiskies range like Benriach 35 or Old Pulteney 35. Anyway, this is top of the line and a superb dram that deserves to be drunk rather then collect dust on a collector's or investor's shelf. 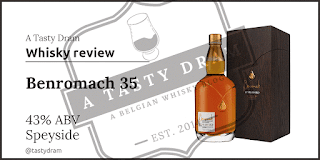 What do other people think of it?

There are others out there too. Google is your friend.
Source and pictures: Benromach.com