Images of an 8 year old single malt have been "leaked" to celebrate the 200th anniversary of Lagavulin.

Lagavulin is the third distillery on the isle of Islay celebrating its bicentenary.  One of the bottlings will be an 8 year old single malt (age statement, big YES) bottled at 48% (+43% ABV, another big YES).

A word of advice - my honest opinion, not an advice perhaps - to the people of Diageo (supposing they even read this blog post). Ditch the e150 for one time. You're selling the whisky in a cardboard box and a green bottle. No way consumers will leave the bottle on the shelve because of a difference in colour or a too pale hue.

People thinking "Hey, this whisky seems to be a lot paler then my previous bottle" are NOT the ones who buy different batches to put them side by side to compare. The whiskygeeks/nuts on the contrary... we only kick on those differences in stead of being turned down. We love seeing and tasting the differences between batches. So please, no caramel colouring this time?

The label is hinting at Alfred Barnard's visit to the Lagavulin Distillery that was noted down in his book The Whisky Distilleries of the United Kingdom. Maybe the original text could reveal some more clues? 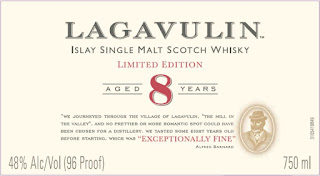 We journeyed through the village of Lagavulin. "The Mill in the valley". And no prettier or more romantic spot could have been chosen for a distillery. We tasted some eight years old before starting, which was exceptionally fine. - Alfred Barnard in The Whisky Distilleries of the United Kingdom.

The label appeared today on the public registry of Colas Online