April Fools or an answer to the fans? 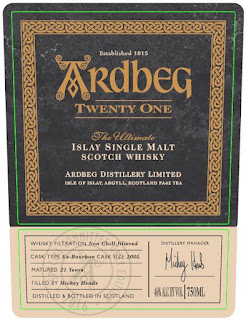 The public TTB registry revealed a label for a 21 year old (an age statement, what is happening??) Ardbeg.  It hasn't been a week since Oliver Klimek published his Annual Struggle article and the Dark Cove disaster and now this happens. Probably a very fortunate timing for the approval of the label.

Allied Distillers restored production with malt from Port Ellen Maltings in 1989 until 1996 when the distillery was closed (again) and put up for sale. The whisky dates from this time frame.

Allied Distillers also acquired Laphroaig in 1990 and their Distillery Manager Ian Henderson was put in charge of both distilleries. The decision to use malt from Port Ellen malts also meant a drop in phenol levels. From approximately 80-90ppm from their own malting floors to 30-35ppm.

Between 1991 and 1995 Ardbeg operated at only one third of its capacity. That means they probably did not even produce over 200.000 litres per year in the period from which this whisky comes...

What the back label reads:

Source Ardbeg Twenty One. A rare glimpse into Ardbeg’s precarious past. A shining example of its unwavering quality. This momentous bottling contains whisky distilled during some of the most precarious days of Ardbeg’s past, when only a handful of casks were set aside. Sumptuous and soothing, melding pepper, rye and Ardbeg’s famous peaty smoke, this is a golden dram born from adversity, determination and dedication. 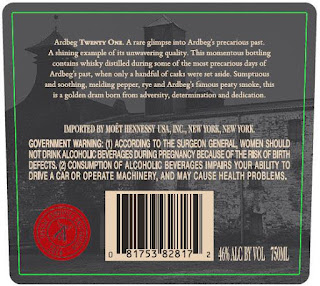