Glen Moray Distillery lies on the banks of the river Lossie in the Speyside region. The distillery was originally a brewery (West Brewery) and was converted into a whisky distillery in 1897. Before the takeover by the French group La Martiniquaise in 2008, Glen Moray was relatively unknown and was overshadowed by Glenmorangie and Ardbeg.


It is now one of the biggest in the industry with a capacity of 3.3 million liters and by the end of 2015 they should be able to produce 6.5 million liters of alcohol. The whisky contributes to the fast growing and hugely popular blend in France Label 5. The core range consists of a NAS Classic, 10yo Chardonnay cask, 12 yo and a 16yo single malt. The range has been expanded with a Peated cask and a Port finish a few months ago. 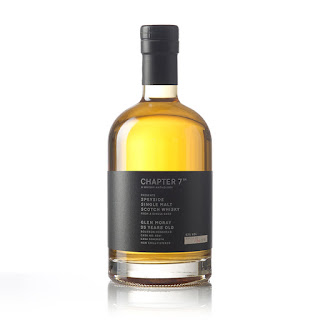 
Colour: Rich gold in colour. This is no youngster anymore and it cannot hide it. It’s swirling legs are fat and slow. The promising sign of a respectable aged malt.

Mixed with a few drops of water there’s plenty of coconut oil and a pleasant touch of cork. Champagne or Poire Williams sherbet.

Taste: There’s that promised lovely texture. Sandalwood and roses. Coconut cream mixed with a musky perfume. An old leather chair in a perfume store or a barbershop from a bygone age.
With water things get creamy and soft. Old sweet wine with woody accents giving it a slightly bitter touch. Breakfast with Earl Grey tea and tangerine marmalade. 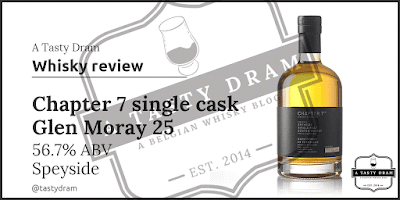 Price: €129 if you buy it via Chapter 7's Indiegogo campaign (a steal for a rather rare old Glen Moray)

Selim from Chapter 7 started an Indiegogo campaign recently. Through different subscriptions ("perks" in Indiegogo slang) you can buy Chapter 7 samples or single cask whiskies. You can save up to 35% on regular sales price, receive every quarter a new bottle to open and enjoy with friends.  Subscribers also get early alerts on upcoming releases.

You also get access to the Wanthology Club, a webshop where you can buy sample sets of Chapter 7 single casks  more mainstream single malts and an occasional hidden treasure (Triple matured Lagavulin springs to mind). These lovely tubes in presentation box make great gifts for Father's day or just to spoil yourself.