Glen Garioch distillery lies in Oldmeldrum in the east of Scotland. It's one of the older distilleries in the country.

The distillery is owned by Beam Suntory and plays an important part in the childhood memories of the Master Blender Rachel Barrie. She claims she became acquainted with Glen Garioch as a 7 year old suffering from an earache. Her grandmother made her a hot milky toddy made with 8yo Glen Garioch to cure it. She still remembers liking it so much that she feigned earaches several times thereafter and asking for a hot toddy to soothe it.

This hogshead walks through an orchard of ripe apples and warm woodiness. 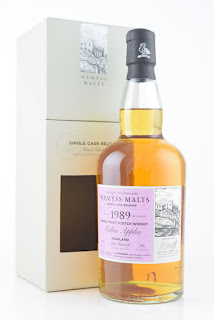 Colour: This clearly is what we call a golden oldie. The whisky leaves slow legs on the glass.

Nose: It lives up to its nickname Fallen Apples. Home made unsweetened  apple sauce. Oak and fennel. A sweet candy apple from an old fashioned fair planted on a grassy field. A orchard in full bloom. The nose is rich and fruity. Oranges stuffed with cloves. Eggnog with vanilla seeds.

A single drop of water is all that is needed. Add some tangerines and orange tree bark to the mix. Orange blossom water and fresh picked cherries.

Taste: Rich on the palate. Liquorice root, oak, fennel seeds and oranges. Its age gives it a thick chewable texture. Apples and raisins. Danish pastries fresh from the oven. A touch of caramel tobacco.

Finish: Spicy in the aftertaste. Makes me think of the Indian cuisine somehow. Apple pastry with cinnamon and raisins.

My God... If this is the first Glen Garioch you're reviewing it becomes very difficult for official Glen Garioch bottlings to beat this one (although I remember the entry level Founder's Reserve being surprisingly well made). A fabulous bottling reminding me I should buy 20+ samples more often. Great pick Wemyss, great pick from the basket of single malts in your portfolio.

Disclosure: Thanks to Emma Hooper from Wemyss Malts for sending me a sample. Opinions stated above are of course my own.
English Glen Garioch Highlands Scotland Tasting notes Wemyss Malts