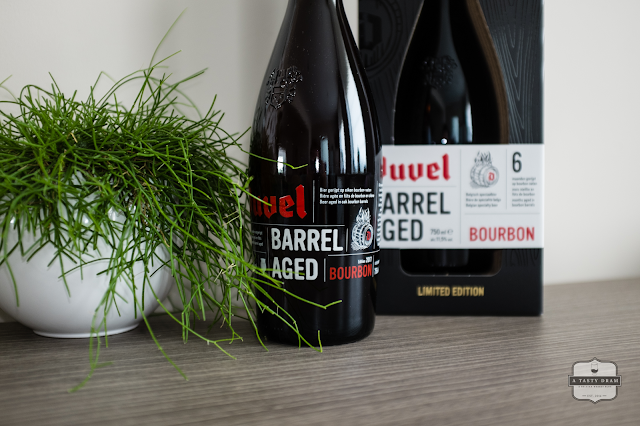 Aaaah, Duvel! The godless beer got his name - according to an urban legend - during a tasting session. One of the participants called it a duvel (Flemish for devil). And so became Victory ale, a dark victory beer after WWI, Duvel. In 1970 the beer got a complete transformation. It became a strong blond ale and the paunchy tulip glasses were introduced.

In recent years the classic Duvel got company of a Tripel Hop and a one time experimental Duvel Distilled in 2009. This six-year-old whisky caused a male mass hysteria at the brewery. And so a Duvel matured in whisky casks isn't a giant leap anymore.

At the start of 2017, Duvel Moortgat announced they had filled 104 American oak casks from bourbon distilleries Buffalo Trace and Four Roses with Duvel beer. The result of this experiment ended up in stores last week. 24.750 bottles of Duvel Barrel Aged brewed with the classic Duvel hops Saaz-Saaz and Styrian Golding are waiting for curious noses.

Colour: This is not the strong blond ale we know anymore. The colour evolved into a dark amber copper colour. Also, the typical Duvel collar isn't there (unless I messed something up).

Taste: Soft and creamy with a subtle bitter touch. The usual Duvel flavours are enriched with flan caramel, grapefruit and milk chocolate. The classic bourbon flavours are pretty assertive. A whiff of cocoa and citrus peel. 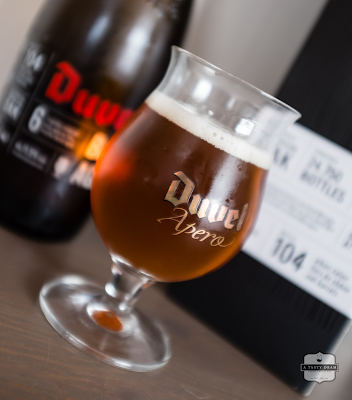 This is a tasting beer pur sang. It has nothing to do anymore with the regular Duvel but nevertheless top shelf stuff. One to enjoy quietly with company. The Duvel beer has a way of knackering people. The Duvel Barrel Aged raises the bar even higher so be careful. (Before you know realise it you write down 24.0000...). Truly a beer for whisky lovers.


Duvel Barrel Aged might be a bit pricey. Around €25 for a 75cl bottle. On the other hand, that's what you're paying for a decent wine too. The first online batch sold out in the blink of an eye. From 28 June, they are on sale in some supermarkets and beer stores.