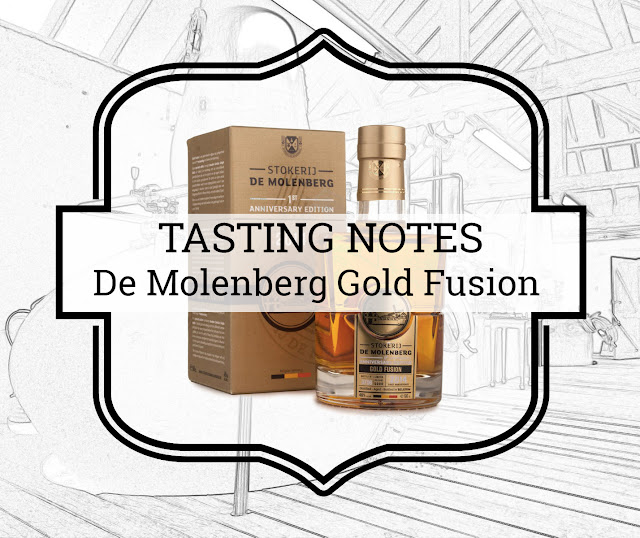 Anyway, the Gold Fusion marked the first anniversary of the Gouden Carolus single malt and put the distillery itself - De Molenberg - in the spotlight where the regular whisky goes by the name of the beer Gouden Carolus. This anniversary whisky was followed by Fado Vivo (with port influences) and Sola Jerez (with oloroso sherry influences).

Colour: Copper in colour, oily beads stick to the glass.

Nose: The first thing that hit me was a note of Pisang Ambon, that chemical green banana liquor from the 90's. Not the best start ever but let's go on. Banana candy and a spicy overtone. Stem ginger and dried fruits (bananas, raisins and apple). A flowery perfume, soap with citrus extract and stale gingerbread. There's a slightly metallic note to the huge bourbon and milk chocolate aromas. For some reason, I'm getting something of a forest.
With water: More bananas and orange rind. Some lemon vodka and cheap limoncello.

Taste: Christmas cake paired with gingerbread and lavender. Again that soap note coming up. Sweet notes from cinnamon and bay leaf. A tiny touch of aniseed and chocolate.
With water: Banana and Pisang Ambon enhance its sickeningly sweet character. Honey and bay leaf versus spicy peppercorns versus bitter orange rind. A coriander and cumin-infused gin.

Finish: Sticky and bittersweet. Flower honey and gingerbread. A bitter finish with some dried wood twigs. 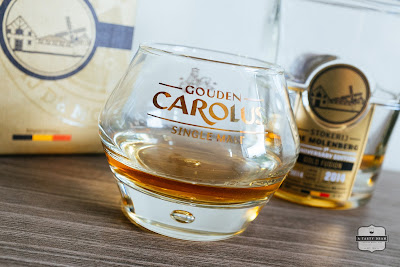 Even after a year, this whisky left me puzzled. The first glass was seriously off-putting and I left it for about six months in my cabinet without touching it. I only started making tasting notes after a third tasting session. Based on the tasting notes it could have been a very decent whisky, yet that slightly chemical Pisang Ambon and soapy note didn't do it for me... Next week I'll be trying the regular Gouden Carolus single malt.