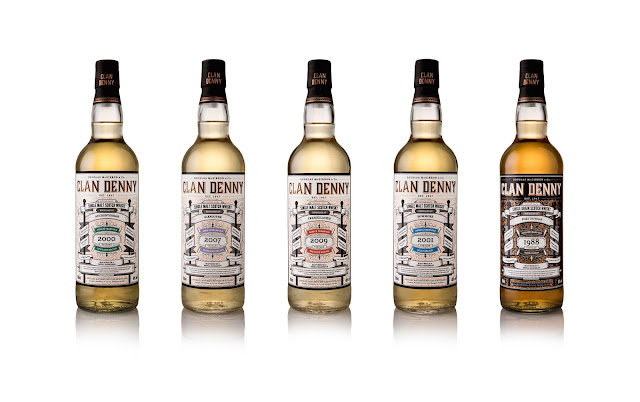 At the start of the summer, Douglas McGibbon gave its Clan Denny range a thorough facelift. The old packaging had become dated and no longer did justice to the old and sometimes rare whiskies inside. It was also an opportune time to relaunch the brand, as the Douglas McGibbon company turns 70.

Douglas Laing has a very talented in-house designer - who remains unknown for now - amongst its ranks who collaborated with a freelance illustrator to produce the packaging of the new Clan Denny. As Clan Denny sits under a sister company Douglas McGibbon, McGibbon being the name of Fred Laing's mother, they wanted the packaging to have an entirely different look and feel compared to the single cask brands from Douglas Laing: Provenance, Old Particular and XOP.

People familiar to the Provenance series from Douglas Laing will see a pattern in the use of accent colours. The regional colours are the same as those shown on Provenance, Old Particular and XOP. The colours are chosen to represent the landscape in each of the Scotch Whisky regions – green to represent the elegant, grassy Lowlands, purple for the heathery Highlands, red for the spicy, often-sherried nature of Speyside whiskies, and blue to represent the crashing waves of Islay.