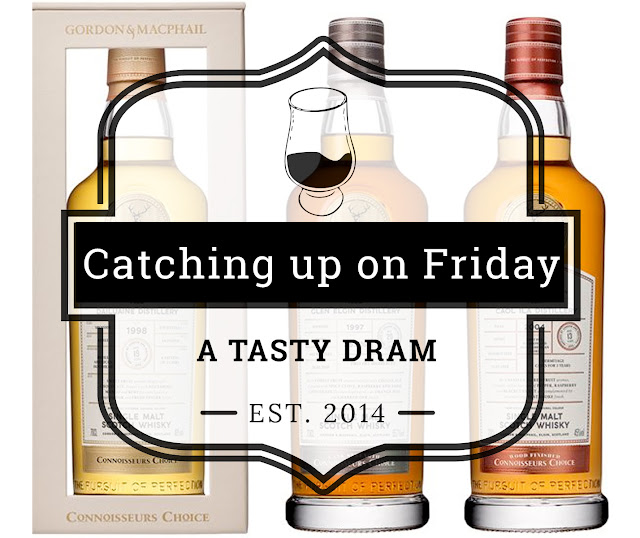 It has been a while since there has been a Catching up post. Or any decent blog post for that matter... Family life and work have been fairly demanding the past few months. And it looks like there’s a lot to catch up with. I'll try to get you up to speed in less than two minutes on the latest whisky news, rumours and interesting blog posts from the past week.

The international drinks concern Anheuser-Bush InBev, with some a Belgium’s best-known beers in its wallet (and Budweiser), buys Master of Malt for an undisclosed sum. Well, actually they bought Atom Brands that consists of the online retailer Master of Malt, Drinks by the Dram and Maverick Drinks. They will be able to use AB Inbev’s supply network and to grow further.
Master of Malt blog

The annual Special Releases never fail to lit a few conversations. For the first time since 2001, there will not be a release from the two Ridiculously Expensive For Collector’s and Rich Russians closed distilleries Port Ellen and Brora. The decision is the consequence of last year’s nuclear news bomb that Diageo would be reopening both silent distilleries. The old and trusty unpeated Caol Ila and 12-year-old Lagavulin will be joined by an 8-year-old Talisker. Something to look forward to. Nine expressions were revealed, a tenth remains secret...

The Elgin based independent bottler will be reorganising their whisky subbrands. Only five of them will remain: Discovery (entry level whiskies), Distillery Labels (single malt with vintage labels), Connoisseurs Choice (the classic single malt range), Private Collection (more luxurious expressions) and the ultra-premium Generations (whisky that costs you a kidney and a lung).

The world’s biggest drinks producer announced plans to invest £150 into its 12 distillery visitor centres and a brand new brand home for the iconic Johnnie Walker brand in Edinburgh. By doing so Diageo wants to promote Edinburgh (and Scotland) as a major player in the drinks tourism segment.

Henry Donnelly, who completed the Jameson Graduate Distiller Program in 2016, will take over the from Karen Cotter at the Midleton micro-distillery. The small-scale distillery is focusing on recipes found in the notebooks of John Jameson dating back to the 1820’s.

Nothing to report… yet!