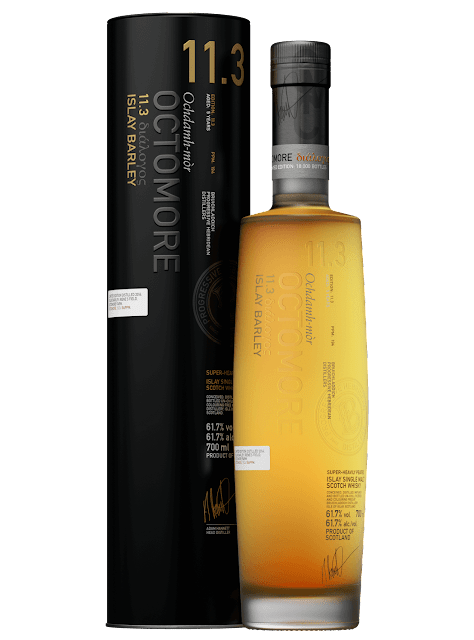 Time to start chapter 3 in the Octomore 11 series from Bruichladdich. The third Octomore release is usually an Islay Barley. The barley is grown by James Brown from the Octomore farm. This is a single field, single vintage Octomore malt. Let's dive into the Scottish counterpart of Del Maguey mezcals!

Colour: This looks like a Chardonnay with a light yellow colour. The texture, however, appears to be fairly thick.
Nose: Its young age is speaking up. Smoke and peat. Barbecue. Smoked fish and rye. Schwarzbrot or German black bread with rye and a touch of vinegar. Grains, vinegar, balsa wood and plug tobacco.
With water: Oranges, brown sugar and candy floss. Crème brûlée with plenty of vanilla.
Taste:  Smoked bell pepper and rye bread. A creamy mouthfeel and quite some alcohol burn. Slightly bitter and herbal notes. A minty note. A whiff of citrus.
With water: Young bitter oak, vanilla and soft smoke.

Finish: Slightly medicinal with a bitter note and a touch of citrus.
The Islay Barley malts are slow sipping experiences. They distinguish themselves from their 'normal' counterparts, certainly this Octomore. The production and maturation is virtually identical to its 11.1 brother and yet it has a distinct personality and a different alcohol percentage. A striking image of its namesake: Big, bold with a strong character and a soft spot.
Sample and picture: Bruichladdich
Bruichladdich Islay Octomore Scotland Tasting notes