Aultmore is one of these lesser known Speyside distilleries. It was founded in 1896 by Alexander Edward (who was also behind Benrinnes and Craigellachie). The name Aultmore is derived from Allt Mòr, the water source of the distillery.


Most of the distillery's output goes into the blended whiskies of Dewar's. A 12 year old bottling has been so far the only official one. Under the Diageo reign there was a Flora & Fauna 12yo and after the sale to Bacardi, the new owners introduced another 12yo Aultmore whisky.

Global Brand Ambassador Stephen Marshall convinced the Bacardi management to breathe new life into the single malts from Bacardi's portfolio. And to make us geeks really wet our pants, they announced to do age statements, no colouring and no chilfilltering. The project was baptised The Last Great Malts and consists of Aberfeldly, Aultmore, Craigellachie, Royal Brackla and The Deveron.


Now, let's see what hides in the thick fog along Buckie Road.

A few drops of water show some sweet and fruity flavours. I'm mainly getting honey, vanilla and melon.

Taste: Refreshing and soft on the palate. Baked apples, vanilla, honey and a slight trace of smoke. A lot of earthy flavours too. There's a creamy evolution with brioche bread and milk chocolate.

Finish: A creamy aftertaste with milk chocolate and granola bars with honey and nuts. 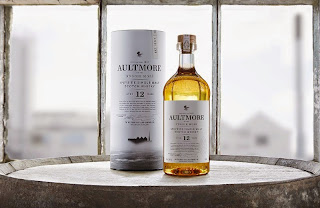 The Aultmore 12 is a fab whisky and merits a place next to a Laddie Ten, a Benromach 10, Ardbeg 10 and a few other quality entry level Scotch whiskies. It ticks all the right boxes of a good whisky: packed with flavour, quite a few layers of complexity, +40% ABV, natural colour and attractive packaging. I'm already a big fan of the 12 years old.

However, there could be one serious drawback. The pricing is very steep in some shops. I've seen it priced at very affordable levels, say less then €45. At that price point it's a no-brainer and an absolute must-have for your cabinet.
But... some shops set the pricing at €70. Now that's a point at which they enter the playground of single casks or small batch whiskies at cask strength (in this age range) and I'll be less likely to opt for the Aultmore 12. Set the pricing on the right side of the €60 mark and Aultmore will gain a lot of fans.