on February 01, 2015
Belgian whisky club Maltclan rejoices us every year with a fantastic low-budget festival and a usually equally superb Speyside bottling from Gordon & Macphail. This year was no different. The sixth consecutive festival is outgrowing itself and the fourth club bottling, a 1999 Strathmill, is yet another VFM touchdown.

The whisky was selected by 42 Maltclan members during a tasting in Lossiemouth with Eric Vermeire of Whisky Warehouse (Belgian distributor of G&M) and Juliette Buchan (Export Regional Manager at G&M) on their Speyside trip in 2014.

Strathmill is yet another Diageo distillery that mainly supplies malts for the blending industry. J&B is one of the better-known blends containing Strathmill. The distillery came to life in 1891 as Glenisla-Glenlivet. Strathmill was given its contemporary name in 1895 when gin company W&A Gilbey bought the distillery for £9.500. The only official bottlings, to my knowledge, are a 12yo Flora & Fauna and a 1996 Manager's Choice single cask bottled in 2010.

Colour: Another golden and natural beauty. The whisky didn't subdue artificial colouring or any form of filtration. Thin and fast legs appear after swirling and leave a lovely oily coating to the glass.

Nose: Let's start with a real giveaway: lots of vanilla flavours on the nose. My first impression is a homemade fudge. And the alcohol is quite stingy on the nose. Approach with careful sniffs! I smell a lot of woody notes. A subtle hint of beeswax and toasted oak. Rice pudding and apple pie with icing sugar.

Don't be afraid of adding some water. It only reveals more yummy apples and cinnamon. And some potpourri. Applesauce with red chilli peppers. A freshly brewed earl grey tea and a scraped vanilla bean.

Taste: This is one hefty fella when you drink it neat, though the texture is rather light! A whisky that almost begs for a dash of water. The black pepper from the official tasting notes is certainly present together with some green banana. And meaty notes of black pudding.

Water makes the whisky creamier. I'm finally getting that bourbon-y fruitiness from bananas and melons. The peppery and woody notes remain present. A slightly refrained hint of citrus. Crème brûlée with lemon rind. 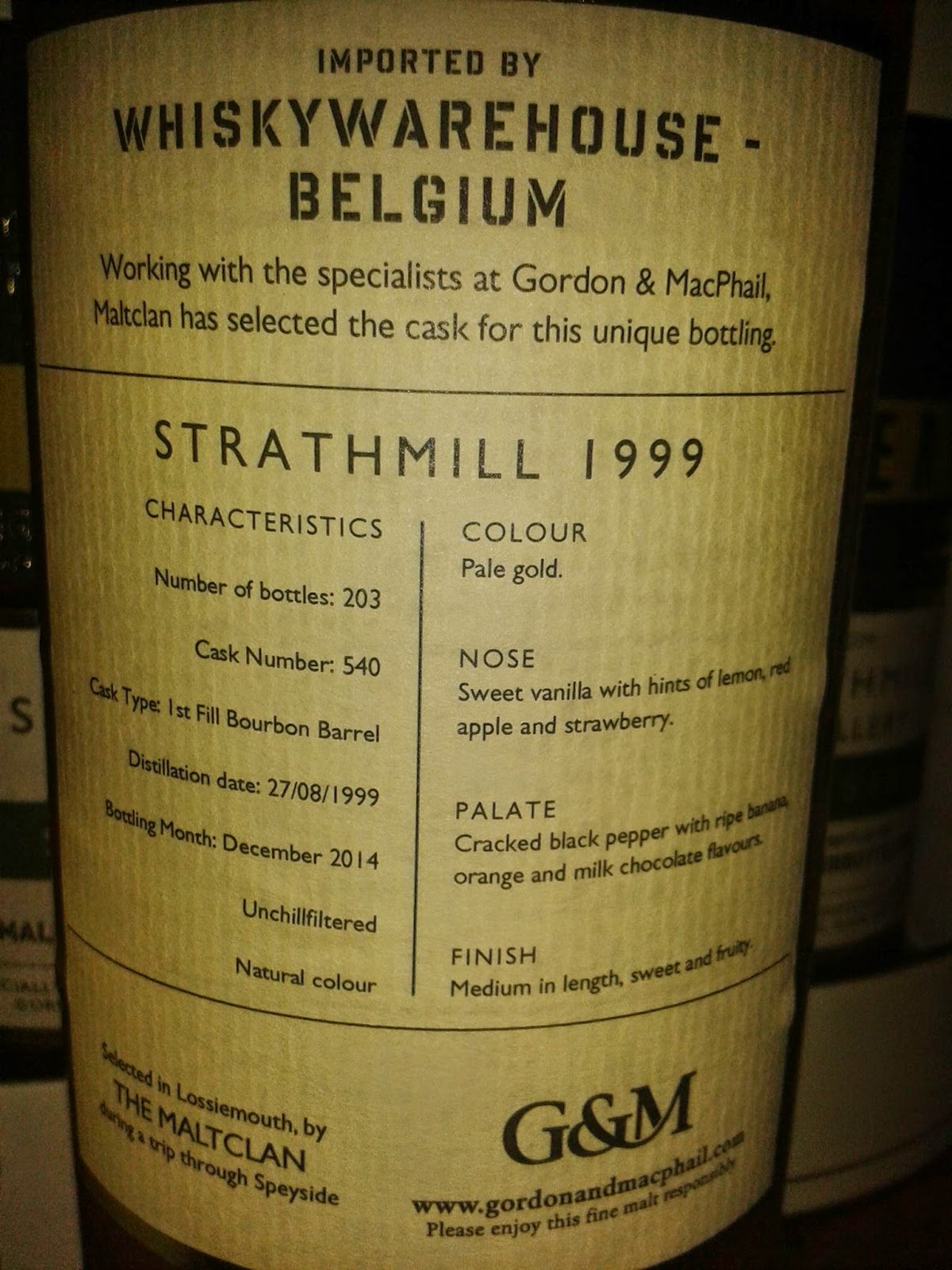 Yet another epic Maltclan bottling. After a Glenrothes, a Glenburgie and a Glenlossie (I reviewed this last year) they turned to another somewhat disregarded Speyside distillery. These lads seem to have some fine noses when they go pick their bottling at Gordon & Macphail.

The 2015 bottling costs €55. Not bad for a 15yo first-fill cask strength single malt, huh? Bottles can be bought at club meetings or with some inside help. But you'd better be quick. 170 bottles went down on the first weekend. 16 bottles to go... 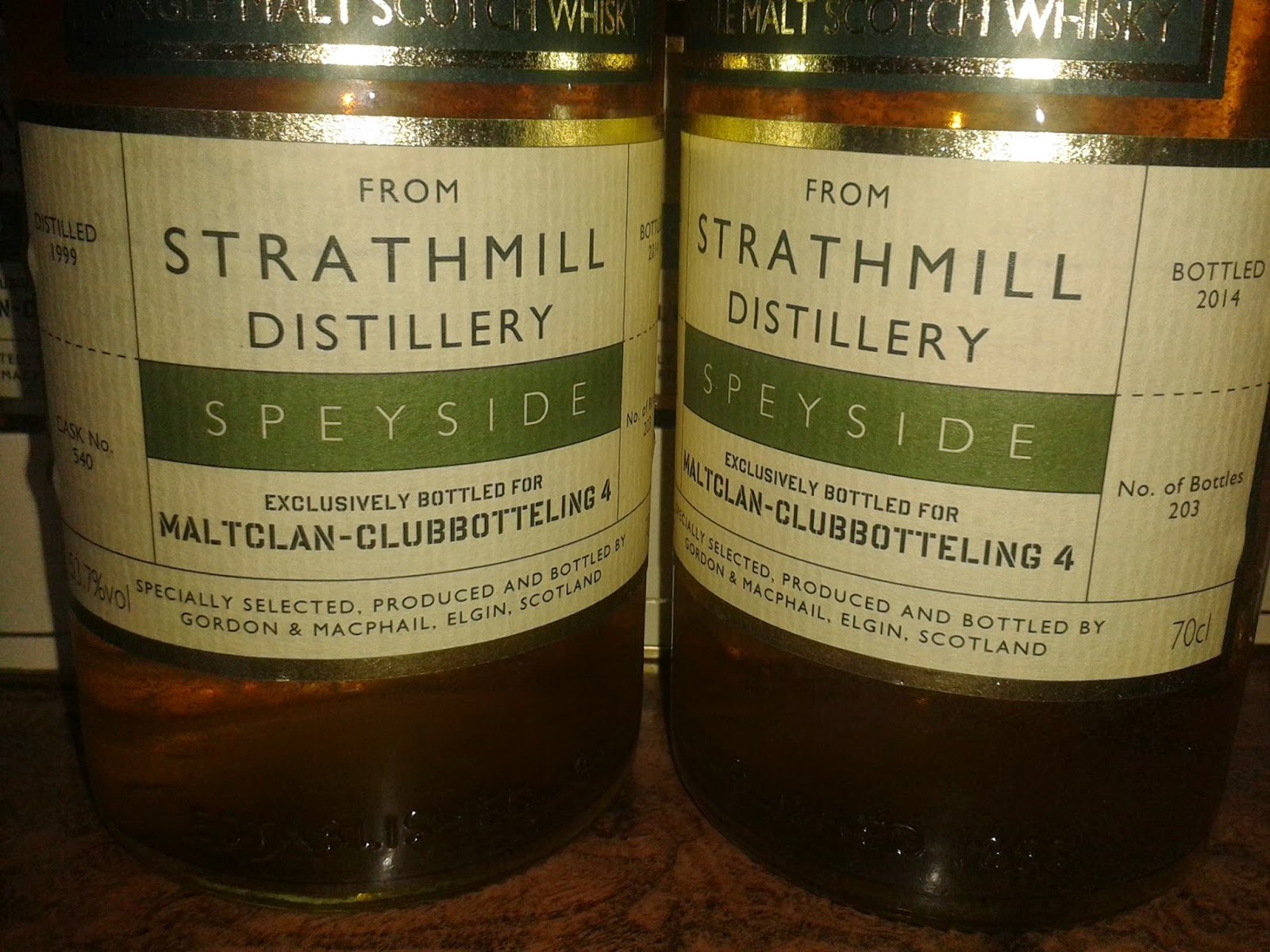