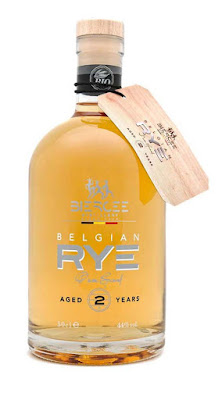 Back in 2015 I preordered a few bottles of Belgian Rye whiskey from the Biercee Distillery in Thuin and got to taste the new make. Or at least, that's what they promised back then. It would not have been the first Belgian rye whiskey. They were beaten by Filliers Distillery who released the Sunken Still rye whiskey. Two years later, Biercee released their organic rye spirit. Yes, you read it right, spirit instead of whisk(e)y.  Although we signed up for a 3-year old whisky, we got a spirit.
Anyway, the new make was very promising so let's approach it with an open mind.

Colour: pale gold. Thin fast legs reveal a light texture.
Nose: Lots of sweet aromas. Puffed rice and chocolate. Ovomaltine, biscuits with apple and green banana. Freshly baked fudge with condensed milk. Butterscotch with a chocolate heart.
Taste: Sweet and peppery. Violets and caramel, Black peppercorns give it a bitter touch. Young spirit, sappy wood and pear skin. Allspice, aniseed and unripe beech nuts.
Finish: Dry and sweet. A nutty fino flavour coats the mouth.
Thank god, the spirit delivers. It's a balanced rye whisky that can be perfectly drunk neat or used in classic cocktails with a lead role for rye. And yet it leaves you with mixed feelings. What if they decided to mature it another year. Perhaps some of the single casks or a newer release will tell the full story.