Allfather has arrived in Midgard 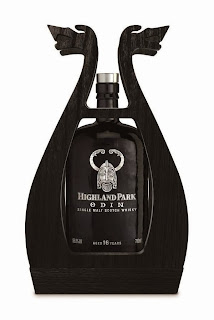 The Valhalla Collection tries to put the personality of a god in a glass. Odin packs a mighty punch at 55.8% ABV but finds a balance between the god and Highland Park's signature Orcadian style resulting in a rich and undeniably powerful 16 year old single malt whisky.

Colour: Vivid burst of sunlight. Entirely natural in colour, this whisky is a glowing representation of Odin’s distinct and mighty character.

Nose: This intense whisky possesses a fierce spice. Cinnamon bark and nutmeg rise from Odin’s spirit. Behind the spice, toasted walnuts smoulder with pulsating explosions of smoke. Odin cuts an ominous figure and this whisky is no different.

Finish: Throughout is a subtle sweetness, sharing the knowledge of well-seasoned sherry wines. Plums and soft fruit disappear into the dark as the peaty embers glow into a smoky finale.


The characteristic wooden frame underwent a small visual change and seems to have been charred. The mysterious dark bottle and metal cork ornament set Odin completely apart from its predecessors. 17.000 bottles are available worldwide. The Netherlands got 1.700 bottles allocated, Belgium a mere 84 bottles. (note: I'm trying to find out why there's such a significant difference).